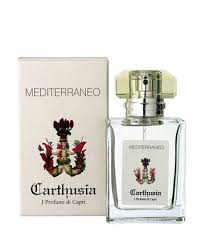 A 450 year old Italian brand based on the Isle of Capri. Legend is that the father prior of the Carthusian Monastry had picked the most beautiful flowers for the arrival of the queen and they remained in the same water for 3 days.  When he went to throw them away he noticed the fragrance.  He went to the father alchemist who traced the origin of this scent back to the “Garofilium Silvestre Caprese”. That water became the first perfume of Capri. Forgotten for many years, in 1948 the Prior of the Monastery discovered the old perfume formulas and by permission of the Pope, revealed them to a chemist, who created the smallest fragrance laboratory in the world and called it ‘Carthusia’. Today the perfume tradition continues and limited production ensures the same methods used by the Carthusian monks are respected.

Green Lane is open for coffee and breakfast at Plantation Cafe from 8.30am daily and for shopping at The Orangery, Botanique, The Potting Shed, Dirty Janes, Suzie Anderson Home and Campbell & Spearman Interiors from 10am till 5pm daily.

Harry’s on Green Lane is open for 2 lunch sittings daily at 12 noon and 2pm and for 2 dinner sittings on Friday and Saturday at 6pm and 8pm.

We look forward to seeing you soon in Green Lane.